Everybody has heard about voltage, current and resistance electrical quantities. Here is what you have to know about them to get started.

Voltage, also known as potential difference, is the initiator of current flow. The unit of the voltage is the Volt (V). In the nature, every systems seeks the equilibrium. Think about the temperature : you have some rooms at different temperature, if you open the doors, the temperature will settle at a value sitting in between the maximum and minimum temperature of the rooms. The same happens for electricity, pressure (i.e. water level in pots) and even odours. Voltage consist of an unbalance of electrical charges (electrons). So the electrical potential difference will create a flow (current) when a path exist between the positive and negative electrodes.

Voltage can be stable over time (DC) or varies over a period (AC). There are also transient voltages, that exists for a short amount of time. In electronics, we mostly use direct current. This is because of the transistors, which works only in DC (every digital integrated circuits are made of a lot of transistors).

We already said that the current is the results of the electrical potential difference. The unit of the current is the Ampere (A) and correspond to a flow of a predefined quantity of electrons per second. For the curious, this predefined quantity is one coulomb and it contains 6.24x10^18 electrons. The electrical current is responsible of heat elevation in the different conductors. This is the principle of the electric heater. Current in a wire will also generate something invisible called a magnetic field. The same kinds of magnetics field are generated by magnets.

The power is expressed in Watts (W) and is used to calculate the amount of energy consumed by a circuit. In fact, energy is the result of power over a certain amount of time. For example, you have one 100W light bulb, on for a period of 10 hours. This result of an electrical energy consumption of 1000W for one hour : 1kWh. The kilowatt hour is the unit of energy used by electrical distributors to bill their clients.

The Ohm's law is the most basic and most used formula in the electrical domain. It was named after the German physicist Georg Ohm, in 1827. This law links the three principal electrical quantities.

This is all you have to remember. By manipulating this formula with simple algebra, you can compute each quantity by knowing the other two. Here is an interesting picture that shows the possible equations we can generate with the Ohm's law (and by knowing that P = E x I). 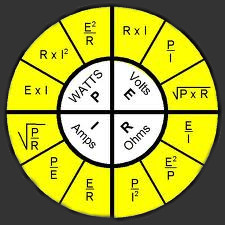 I'm going to give various calculation examples, can you guess which equation is being used?

Take a look at this Ohm's law calculator, just let one blank field for the unknown value.

I hope you learned something new by reading this post. The next step will be to fiddle with a power supply and resistors to get the grips with the Ohm's law. You will also learn about voltage dividers.

See you later friends and have fun! 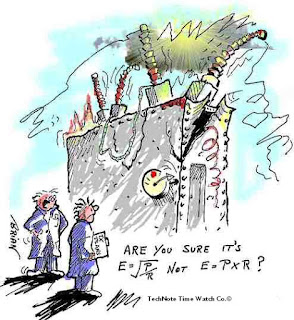