The goal with a voltage source is to supply a load with a constant voltage. However, if the impedance of the load varies, the load current will vary too. For some reasons, if you need a constant current through a load, you will need a current source. A current source will sense the current through a load and adjust the voltage across it to keep that current constant. Take a look at the standard sources symbol: 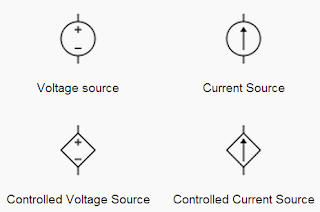 Constant current sources can be useful in different situations, like DC motor control. For a DC motor, the torque is proportional to its current; this means that we can effectively achieve constant torque control with a current source. Another example is battery charging, some of them require to be charged at a constant current rate. They are also convenient to supply a constant current to a load that is highly dependent to temperature.

I have been searching for a while for an adjustable current source circuit and I think the following one is quite simple and reliable. It works with a single operational amplifier in negative feedback configuration. I added a second op-amp to make a voltage comparator with the potentiometer. It's used to light up the orange LED to indicate when the potentiometer is over 80% turned on (that is, >0.8A when the current source is shorted); this helps me remind that the components may be hot! I also placed a green LED in series with the 12V voltage supply to indicate when the circuit is working.

Here is the principle of operation of the op-amp current source (only the upper op-amp is used for the source):


The maximum current that will be supplied by the current source will be about 1.2A (12V / 10Ω). If we consider the voltage loss in the Darlington TIP107, it will be more around 1A.

For fun, I soldered the circuit on a perforated board. The red and black binding post are the load terminals. The 12V is supplied to the little blue terminal block. The TIP107 is supposed to be able to carry 8A but I realized that even at 1A, it was getting awfully hot; i then decided to put an heatsink on its back. If you make a similar circuit, beware of the current sense resistor too! I burned one of my finger on it ☻ 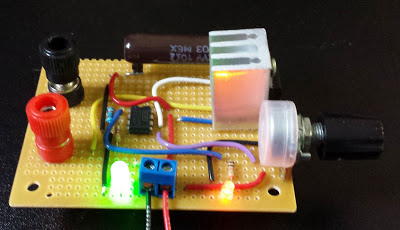 On the picture above, the load terminals are shorted with an hidden wire. The IC in the center is the dual op-amp (OPA2241). The strange looking component is the power resistor (brown devil from Ohmite), it's in ceramic with a flame resistant coating. There is a lot of soldering under the perf board! 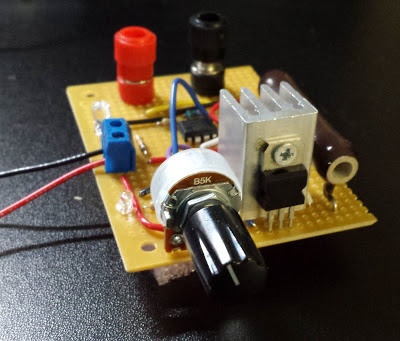