Ask someone about what electronics is, the answer will probably be related to all the modern devices we're using everyday : mp3 players, televisions, computers, cell phones... All of these are made of many integrated circuits containing millions of transistors (sized in nanometer). In numeric circuits, you always need a switching device that can be used to create logic gates and registers. However, these switches have not always been as small as they are today. Here are some milestones in the advances of modern electronics.

The relay is one of the oldest device used to make computers (primitive ones) and is still used a lot nowadays in all sort of different applications. The basic relay consist of a coil, spring, armature and contacts. When the coil is energized the armature close the normally open contact, otherwise the spring maintains the normally closed contact. 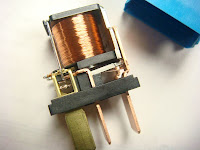 Computer with limited programming capabilities could be made using relays, like the Z1 in germany around 1938. It is considered as the first freely programmable computer, but it's operation was unreliable. 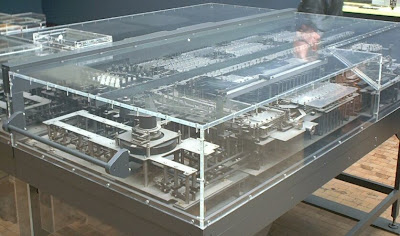 The vacuum tube is a great improvement over the mechanical relay because it contains no moving parts, that means it's a lot more reliable. Like the transistor, the vacuum tube can be used as an amplification device or as a switch. Hi-fidelity audio equipment still use vacuum tubes, for the clarity of the sound it provides. However, it is no more used as a switching device.

The first computers using vacuum tubes appeared around 1945 : the Colossus and the ENIAC. They were quite power hungry and heavy machines. The ENIAC contained around 17500 vacuum tubes as well as 1500 relays. 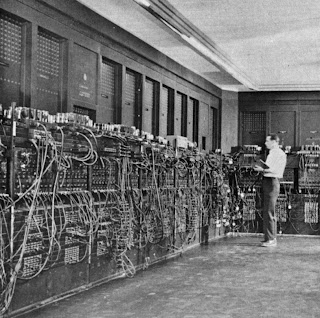 The transistor is the device of choice to create digital electronics circuit and has evolved considerably since it's beginnings. The biggest advantages of the transistor over the vacuum tube is it's small size and small power consumption. That marks the debut of lightweight and portable electronics. In the picture below, you can see a replica of the first bipolar junction germanium transistor. 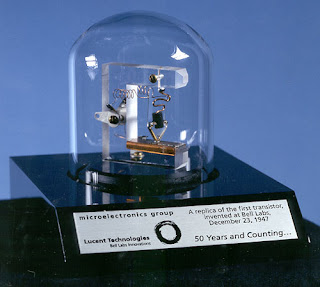 With the invent of the transistor, computers got a lot smaller and were ready to be manufactured for the commercial market. The IBM 608 is one of these fully transistorised computers. Below, a picture of Harwell CADET computer. 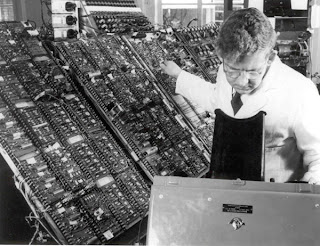 Transistors really began to get small when packaged into chips. That way, a lot of transistors could be packed on the same "die". I bet you have ever heard about Moore's law, stating in 1965 that the transistors count in integrated circuits will double every year for at least ten years. Here is a picture (a little bit outdated) representing the advances in the number of transistor in IC.

As you can see, the first generation of integrated circuits were used to make logic gates. Lots of things could be done with simple TTL gates, take a look at this circuit schematic of an arcade machine Pong game made by Atari in 1974. 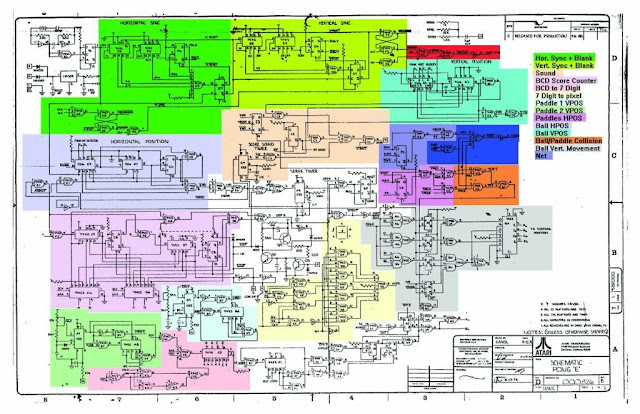 I found an interesting article about computer generations here's the summary (mechanical relay computers not included) :
I bet you learned something new about computers... That's all for today folks!
Posted by Unknown at 6:39 pm